In a world first – Rinnai Japan has successfully developed a Continuous Flow hot water system for the domestic market which uses 100% hydrogen combustion technology and features zero carbon emissions in a way that also addresses the issues of “explosion risk” and provides “combustion stability” typically associated with hydrogen fuel usage.

In line with the announcement, as initial steps are being taken across the Australia market with a view to potentially using 100% hydrogen as a residential energy source, Rinnai plans to start demonstration testing in October 2022 in South Australia and Victoria to help drive the consideration of H2 as a part of the Australian energy mix future. 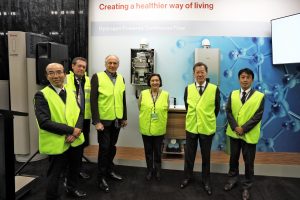 Managing Director of Rinnai Australia, Greg Ellis said, “Today marks a significant milestone in Australia’s shift towards a cleaner and more sustainable energy mix future, as Rinnai delivers a real solution, not a fanciful promise.  The advancements seen here firmly define Rinnai’s ambitions and commitment to work to provide commercial and domestic appliances which not only support the requirements of a changing energy future, but importantly, deliver the trusted reliability and performance that the market expects from the Rinnai brand.”

Followed by Mr. Shingo Yamagami – Ambassador of Japan to Australia, “I’m strongly convinced that the invention of the world’s first hydrogen-powered residential water heater by Rinnai, and the co-operation from Australian partners such as the AGA and AGIG in realising its commercialization, will not only help to take Japan- Australia hydrogen cooperation to a whole new level, but will open up a whole new golden age in Japan-Australia economic relations.”

In attendance for Rinnai’s major announcement at Rinnai Australia’s state of the art R and D facility was the Victorian Minister for Energy, Environment and Climate Change – Lily D’Ambrosio, stating, “New investments in innovation are vital to reaching net-zero by 2050 while delivering new jobs and future industries. The technologies launched today will help give Victorian households and businesses options as we map the best pathway to net zero, supported by our nation-leading $1.6 billion investment in clean energy.”

Also in attendance was Dr Alan Finkel, Special Adviser to the Australian Government on Low Emissions Technologies and Chair of the Australian National Hydrogen Strategy adopted in 2019, who added, “Australia is blessed with abundant renewable energy, but the key to transitioning from fossil fuels is the demand side.  By introducing water heaters to run on 100% hydrogen, Rinnai is making it practical for homeowners to greatly reduce their carbon footprint while still enjoying the convenience of rapid gas heated hot water.”